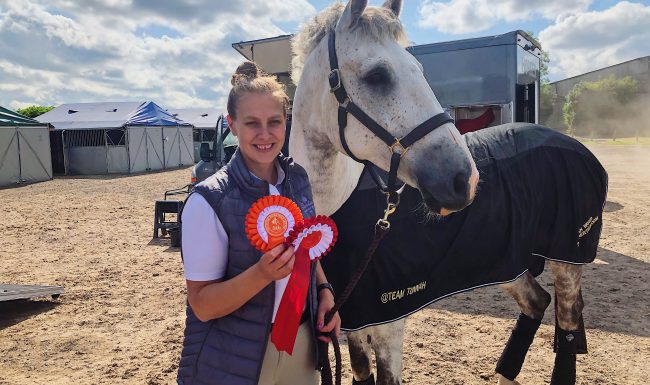 Hello everyone & hopefully you’re all enjoy your summertime with your four-legged friends!

At the end of February, we joined the Silvermoor team as one of their Ambassadors, and since then we’ve had a journey full of ups and downs, but I’m writing this very pleased that we’re currently riding along the good times!

Back in February, Louie went off the boil in many ways. We discovered he had ulcers and he had two successful rounds of treatment, but he still wasn’t right… We tried physio, teeth check, biting solutions, new bridles, and finally after pulling most of my hair out, we tried the saddle. There it was…our problem. No sooner was the saddle refitted, we almost immediately came back on track. We learnt the hard way, with a less than average performance at the Winter Regionals which was a shame and something I was mega disappointed about. Once we thought we were sorted, we went back out to enjoy some BD…It wasn’t enjoyable, and that’s when we fined tuned down to the saddle….

Anyway, things were changing. Louie was loving life, now living the complete tramp life in the field 24/7, stuffing his little pink mouth full of as much grass as could possibly fit in and regularly (daily) thickly caking himself in mud! We enjoyed our hacking and are super lucky to have miles and miles of off-road routes directly around us. Even better, we are based literally on the beach, which would be fabulous to enjoy…if Louie wasn’t well and truly terrified of sand!

Mid-June we got our saddle back, after it being away for almost one month, so with just two weeks before the Area Festivals at Alnwick Ford, we made a plan, and unusually for me, it was all about don’t over school, don’t practice too much, and don’t pile the pressure on.

On paper our performance at the Festival doesn’t look positive – 63.13% and 19th place. BUT I came away quite pleased on a number of fronts. Louie is spooky, there is no getting away from that, so we were first caught out by a big & bright green banner down the long side which was about a horse’s width away from the arena. Everyone has this, but not everyone has a four-legged partner as silly as Louie… After creeping past and giving it a wide berth the first time he cantered past in our test, he settled and accepted it. This is good for him… He was also suspicious of the judge H, which caused a few mistakes, but my aim was to have him in front of the leg being the first competition in years without spurs… We achieved this, and despite being distracted with almost everything, did an obedient test.

A few weeks later, we entered some more BD, this time, down at Richmond Equestrian Centre. The second test threw us some new moves, mostly counter canter down half of the long sides and a rein back. I didn’t see the counter canter until Friday evening and I didn’t see rein back until I was in the warm up… And then realised I’d read an old test!! This test was busy, packed full of movement after movement, with very little time between each movement. I was slightly concerned as to how I would learn it, let alone make all the move. I came away thrilled as we managed to successfully achieve counter canter on each rein, having only had our first attempt the day before, and we managed to slow ourselves down and achieve some balance as made our 10m circles and changes of rein. I was delighted to find out that we’d managed to pull off a 1st in our Bronze section!!

Haylage delivery
We are able to deliver haylage to the following postcodes – please check your postcode is listed before checking out. If your area is not covered please contact us.